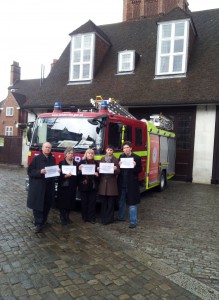 UPDATE: A new report released by the London Fire Brigade shows the increase in average response times across London on a ward-by-ward basis. Belsize Ward will see its average response time increase to 8 minutes, 2 minutes over the LFB’s own 6 minute target. The report shows increases across Camden with 6 other wards also above the target.

Your local Lib Dems are opposing Conservative Mayor Boris Johnson’s plan to close Belsize Fire Station on Lancaster Grove and 11 others across London. His plan would reduce the number of fire engines in London by 18 and cut the number of firemen by 520. His position is the closures are unavoidable and that the reduced level of the fire service will be able to meet London’s need. This is disputed by the London Fire and Emergency Planning Authority (LFEPA), a cross-party body which scrutinises the Mayor in this policy area, and the Fire Brigades Union.

In a proposed budget amendment earlier this year, A budget amendment proposed by Lib Dems along with Labour and Green members of the Greater London Assembly showed that if the Mayor gave up his 7p a week cut in Council tax, then the fire stations and engines could be saved. LFEPA and the Fire Brigades Union dispute the Mayor’s view that the reduced service will be enough and claim that lives and property will be put at risk.

If you would like to oppose the plan or just to have your say on this issue, there are various things you can do:

1) Take part in the public consultation. This is a wide-ranging and quite technical consultation, but you can just complete the section on fire station closures. The consultation is open until 17th June.

2) Come on the march on 25th May. The march will start at Oriel Place in Hampstead at 1130 am and make its way down to Belsize Fire Station on Lancaster Grove by noon.

4) Email the Mayor of London (mayor@london.gov.uk).

The consultation is due to run until mid-June. The Mayor of London will then respond to the results of the consultation. It is likely that he will then decide to go ahead with the planned closures. There may then be a legal challenge from LFEPA to try and stop it. If the consultation has made it clear that a large number of people oppose the move, this may help.